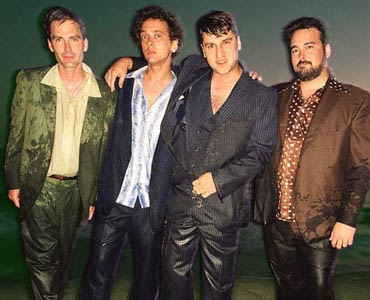 All Tomorrow's Parties Confirm Reformation OfTHE AFGHAN WHIGS + Many More New Additions For I'll Be Your Mirror, 25th-27th May 2012 At London's Alexandra PalaceTHE AFGHAN WHIGS Also Set To Headline I'll Be Your Mirror USA 2012 In Asbury Park, New Jersey On September 22ndTickets To Go On Sale Early January 2012
On the weekend of the 25th-27th May 2012 at Alexandra Palace, London, All Tomorrow's Parties present the second UK I'll Be Your Mirror event. Tickets are on sale now via this link. Sunday headliners Guided By Voices have cancelled due to personal reasons (more info below) - today ATP announce a very special replacement headliner as well as more line-up additions...

On Sunday 27th May 2012 Alexandra Palace will host the first show in 13 years from Cincinnati's rock legends THE AFGHAN WHIGS. Formed in 1986, the bands career from then until 2001 saw them release six acclaimed albums highlighted by the classic Gentlemen LP in 1993. Fusing classic rock with grunge-era distortion and a heavy soul influence, Afghan Whigs were one of the most renowned live bands of their time and this long awaited reformation will no doubt be a very special event. 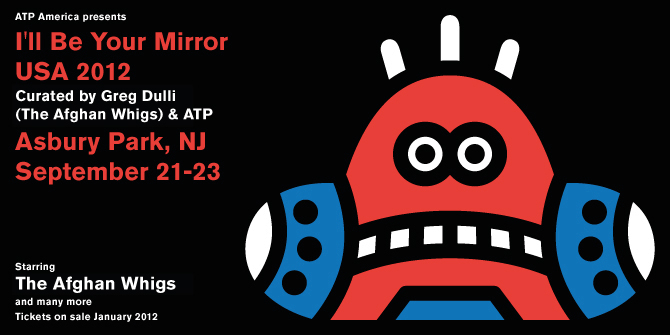 ATP are also pleased to confirm their return to Asbury Park, New Jersey USA where they will follow last year's debut in that city with a 2012 I'll Be Your Mirror event, the Saturday night of which will be headlined by The Afghan Whigs and curated by the Whigs' frontman Greg Dulli. Tickets & accommodation for the three day event running September 21st-23rd will go on sale in early January 2012 when the start of the fantastic line-up will also be announced - fans can sign up now to receive info about a pre-sale via this link.
We also have other confirmations for all three days of the London festival. The event starts on Friday 25th May when the incomparable SLAYER will present their undisputed classic Reign In Blood live in it's entirety during their headline set to celebrate it's 25th anniversary. They're joined by the previously announced SLEEP and MELVINS, and today we can add black metal heroes WOLVES IN THE THRONE ROOM and a rare performance from Oregon doom metal group YOB.
On Saturday 26th May, the first ever ATP festival curators MOGWAI will return to headline, and to curate the rest of the day's line-up - this will be their only show in England in 2012. Alongside their first choices MUDHONEY and reformed slow-core heroes CODEINE we are now very happy to add one of the greatest live bands on the planetDIRTY THREE who will return in 2012 to release a new album. Also returning for their first UK date since reforming last year are cult alt rock band CHAVEZ (feat. Matt Sweeney) and we can also a rare show from FLOOR (feat. members of Torche) and much talked about newcomer BALAM ACAB.

On Sunday 27th May, as well as our new headliners THE AFGHAN WHIGS, we can also add much loved and recently reformed American indie-rock group ARCHERS OF LOAF, San Francisco live wonders THEE OH SEES, and ATP will also be presenting the cream of new musical talent with shows from the wonderful DEMDIKE STARE, and Canadian psych-folk group SISKIYOU. As previously announced YUCK will also perform on Sunday, with much more to be confirmed.

Here is the current run-down of the line-up with far more to be confirmed, see below for more details on the event...
Friday 25th May - curated by ATP

Sunday 27th May - curated by ATP

Guided By Voices Cancellation: We're very sad to announce the disappointing news that Guided By Voices will no longer play on the Sunday of the event due to personal reasons and have cancelled all 2012 live appearances. The band apologizes for any inconvenience and disappointment, and thanks the fans for their longterm support. Those of you who bought Sunday Day tickets for this event are invited to claim a refund if you no longer want to attend. Please contact your ticket agency before the end of January to do so. Once again we're very sorry to be the bearers of this bad news and sorry to those of you who it has inconvenienced.

Acting as sister events to the world famous ATP Festivals which usually take place in holiday resorts, and named after the b-side to The Velvet Underground's original All Tomorrow's Parties 7" single, I'll Be Your Mirror is a series of artist curated music, film and art events taking place in cities worldwide. Last year's debut London event was curated by Portishead & ATP, featured amazing performances from acts including PJ Harvey, Grinderman, Godspeed You! Black Emperor and Company Flow, and was widely acclaimed:

"As an attempt to recolonise the space with the spirit of rock and roll, the inaugural "I'll Be Your Mirror" festival can be considered a resounding success." - Sunday Telegraph

"I'll Be Your Mirror was a pure triumph." - Stool Pigeon

"The UK festival season may be sated but there is room for a new addition as rich as this." - The Guardian

The Great Hall of Alexandra Palace has played host to a history of special acts and events - Led Zeppelin in 1972, New Order, the Stone Roses, The White Stripes, Nick Cave and The Bad Seeds, The Pixies, the Grateful Dead and the epic 1967 kaleidoscopic rave ‘The Technicolour Dream’ which featured Pink Floyd, The Pretty Things & The Move, and now it’s the turn of I’ll Be Your Mirror to be added to the venue’s list of historical moments, in what promises to be an unparalleled weekend of the best music, art and film in the Capital.

Many stunning artists, DJs and other activities are to be confirmed for the event in the coming months! Across the weekend ATP are bringing to the venue a cinema, food vendors, adding extra bars (including some cash bars) and toilets and also putting on shuttle buses from Wood Green (the closest tube station) to the venue and back. Friday runs from 4pm-11pm. On Saturday and Sunday doors will open at midday, with the event finishing at 1am. Headliners will finish by 11pm both nights. For a constant stream of music, interviews, videos and more from artists playing the event, make sure to follow the I'll Be Your Mirror London 2012 Tumblr blog!
www.atpfestival.com
www.illbeyourmirror.com
www.facebook.com/atpfestival
www.twitter.com/atpfestival


For any I'll Be Your Mirror (London) press or event enquiries please contact:
press@atpfestival.com
ATP History:

"Perfect 10...indisputably the defining symbol of alternative sonic culture in the UK." - The Independent

All Tomorrow's Parties has been promoting festivals and concerts throughout the world for the last ten years. It was founded in the wake of Belle and Sebastian’s Bowlie Weekender, with Mogwai curating in the unusual setting of Pontins Holiday Camp, Camber Sands. Since then the festival has appeared every year and has expanded across the globe continuing to set itself apart from large scale corporate festivals by staying intimate and fan-friendly. The line-ups are chosen by significant bands or artists which results in eclectic events that combine performances by legendary and influential acts with appearances by the latest crop of experimental artists from any (and every) musical genre. The festival has become more successful with every passing year, and ATP events have taken place in the UK, USA, Europe and Australia, with past curators including Simpsons creator Matt Groening, Nick Cave & The Bad Seeds, Mike Patton, My Bloody Valentine, Portishead, Sonic Youth, Sl int, and Tortoise. In 2011 ATP launched a new series of curated city-based events called I'll Be Your Mirror, starting in Tokyo in February, London in July and Asbury Park, New Jersey in September.

For ten years ATP has set itself apart from other festivals by embracing seemingly disparate artistic genres, with events featuring art exhibitions, cinema programmes, spoken word performances and stand up comedy. It's been called 'Unforgettable' by Spin and 'the most enjoyable festival experience of our reporter's life' by Pitchfork. It has spawned an acclaimed concert series (Don't Look Back), a record label (ATP Recordings), and the release of a feature length documentary about the festivals from Warp X, titled All Tomorrow’s Parties, out now on DVD. For more information and the trailer visit www.ourtrueintent.com

BACK TO NEWS
Posted by studiodog at 8:36 AM

Great info! I recently came across your blog and have been reading along. I thought I would leave my first comment. I don’t know what to say except that I have enjoyed reading. Nice blog. I will keep visiting this blog very often.
Buy Kamagra

I'm a fan of ATP Website and most of their news are really interesting.
Windows Phone Next App Star

This document introduces the new features of Microsoft Visio 2010 Download and Visio Professional 2010 Download.
Visio Premium 2010 Download takes diagramming to a bold new level with dynamic, data-driven visualization tools and templates, powerful process-management features, and advanced sharing capabilities through the web. Bring the big-picture and real-time data from multiple sources, including Microsoft Excel 2010 and Microsoft SQL Server, together in one powerful diagram with vibrant graphics such as icons, colors, and data bars.
Microsoft Visio Professional 2010 Download is the complete PDF solution for business and technical professionals.