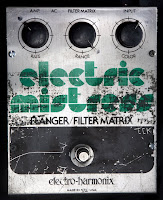 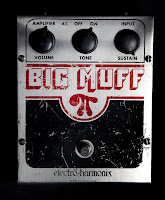 BILLY TALKS ABOUT THE EFFECT PEDALS USED ON EARLY SP RECORDINGS:
'My first mental recognition of the 'power' of the Big Muff came one night when i just happened to drop by a Catherine band practice. Catherine was Kerry's band in the 90's, and we used to share the same rehearsal space (they were the only band we trusted not to steal our shit and vice-versa). So i walked in and i just heard this tremendous ROAR and i thought to myself 'how are they making that sound?'. Each of the 3 guitarists had Big Muffs and the sounds was very Sabbath-like, just throwing this tremendous low drone buzz into the room. I knew that the band Mudhoney used Big Muffs but honestly they weren't using them like Catherine did. So i owe a debt of gratitude to Catherine for showing me the purple fuzz light. We used to try to use the pedals live but it was impossible for there wasn't enough clarity. We did use other Electro-Harmonix pedals live, like the Electric Mistress. We only had one of these in the beginning and James and I used to take turns over who would use it on a given night. Since we were mostly playing clubs we were looking for anything to take your head off and separate the sound of the guitar from the incessant din. The Big Muff pictured is 'the' one from Siamese Dream, the fuzz that launched a 1,000 other dreams i suppose. Almost all the heavy tracks were recorded thru this, solos included. Many songs would have as many as 8 fuzz guitars going at once. It was very difficult to record the tracks with this sound, but once it went right it was BLAMMO, a huge, huge sound. The settings you see in the picture are the exact settings for if you look close enough you can still see the pencil marks on the volume and tone. I had all sorts of theories of how to best use this pedal, including the idea that it only sounded its 'best' when used with a battery (as opposed to a power supply). I'm not much for going backwards but it is tempting to crack out all the old gear sometime and give it one more go. Maybe somewhere in amongst the 44 songs of Teargaden by Kaleidyscope I can find one such moment to do so. The sound of the combo of the Bat Strat, the Big Muff, and the Soul head with Mars cabinet is still unmistakable.
One quick funny story: I used to shop at this music store in San Francisco, and in the early 90's they were selling these pedals back then for about 40 bucks because nobody wanted them. About a year after Siamese came out, '94 i guess, I went to the same store to see if they still had any. The guy behind the counter knew me from before, and told me, 'yeah, i got a couple.' I said 'ok, how much?' '200 bucks' he said casually (which at that time was A LOT for a vintage pedal. '200 bucks!!!! Why are they so much?? Are they rare or unusual?' He said, 'no, but ever since you talked about using them we've sold about 75 vintage muffs. Sorry man, they're all looking for your sound!'. What he didn't know was they were really looking for the Catherine sound.
B.C.
I am laughing as I watch this video for many reasons. I remember asking Billy if he had some clothes I could borrow to wear for the video. So that would be Billy's heavy, furry coat I'm wearing, not sure where the Hershey's Kiss hat came from!
Love, K.B.
Posted by studiodog at 4:18 PM

You have done really a superb job with your web site. Marvelous stuff is here to read.

I would be glad if all WebPages provided such type of best articles.

Valuable information you got here! I would like to thank you for sharing your thoughts and time into the stuff you post.
Cereb

Interesting information I haven’t been through such information in a long time. infographics

A huge round of applause, keep it up. blog post service

You got a very good website, Glad I found it through yahoo.
produk cmp

Incredibly nice article, accurately what I was in search of. Thanks best home security companies

get rid of cellulite said...

Thank you for sharing such great information with us. I really appreciate everything that you’ve done here and am glad to know that you really care about the world that we live in
KLEBE BH

You can't really say what is beautiful about a place, but the image of the place will remain vividly with you.
aanrechtblad

I have learnt various good stuff right here, and I’m sure everyone will get advantage of it.online payday loans for self employed tennessee

I really be grateful for your blog, you have completed the great job. Thanks for the bunch of excellent resourceful site.
stenen tafelblad

It's perfect time to make some plans for the longer term and it is time to be happy. I've read this publish and if I may just I wish to recommend you some interesting things or suggestions. Perhaps you can write next articles relating to this article. I desire to read even more issues about it!closetspoeler

Hi! This is exactly what I was looking for. Thanks for sharing this great Information! That is very interesting smile I love reading and I am always searching for informative information like this! You are bookmarked!live chats

I can see a great improvement in your writing, I’ll love to get in touch. Keep up the good work! Your writing is very inspirational for someone who is new to this type of stuff.
restaurant logo design service
restaurant branding solutions

What's up, nice internet site you have at this time there.
http://allgomedic.com/levitra

Hello ,
Am Mrs Cynthia corvin . Am a lady with a great testimony I live in USA and i am a happy woman today? and i told my self that any lender that rescue my family from our poor situation, i will refer any person that is looking for loan to him, he gave happiness to me and my family, i was in need of a loan of $360,000.00 to start my life all over as i am a mother with 2 kids I met this honest and GOD fearing man loan lender that help me with a loan of $360,000.0.Dollar, he is a GOD fearing man, if you are in need of loan and you will pay back the loan please contact him tell him that is Mrs cynthia corvin, that refer you to him. contact Mr.Zak,via email:- feroozsuptoo@outlook.com

Good site you have got here.. It’s difficult to find high quality writing like yours these days.
I seriously appreciate individuals like you! Take care!!We at Propertyhunters. this is our service web site. please visit our web site.
Thank you.Development & Investment