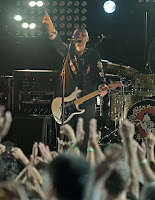 The Smashing Pumpkins have created one of the most acclaimed bodies of work in musical history and have sold more than 30 million albums. Formed in Chicago in 1988, they released Gish, their influential debut in 1991, which was followed by more platinum and multi-platinum albums including the nine-time platinum Mellon Collie And The Infinite Sadness and the four-time platinum Siamese Dream as well as the platinum certified 1998 album Adore. The pivotal group’s many hits defined the alternative music era and continue to resonate on modern rock radio, influencing a whole new generation. The Pumpkins returned in 2007 with their gold-certified and acclaimed sixth album Zeitgeist, which entered the charts at Number 2 in the U.S. and in the Top Ten internationally.

Since their triumphant return to the stage in 2007, the Pumpkins have headlined some of the biggest events around the globe including the Reading Festival, Rock Am Ring, and the V fest. In 2008, the band was inducted into Hollywood’s RockWalk. Their first post-major label release was the song “Superchrist,” issued via the Guitar Center CD Fresh Cuts Vol. 2. They subsequently recorded the song--the modern rock hit--“G.L.O.W.” for the Guitar Hero® World Tour game, marking the first time a band has recorded a new song exclusively for the franchise. In November 2008, the band released their first live DVD, If All Goes Wrong. In December 2009 The Smashing Pumpkins began releasing Teargarden By Kaleidyscope, a 44-song work with songs being released online one at a time for free (4-song physical EPs will be made available as the songs are released). The group’s BILLY CORGAN has said the new music “harkens back to the original psychedelic roots of The Smashing Pumpkins; atmospheric, melodic, heavy, and pretty.”

http://www.thetwilightsingers.com/
GREG DULLI TO EMBARK ON FIRST EVER SOLO TOUR

Seattle, WA - For the first time in his career, Greg Dulli will embark on a solo tour which will see him make stops in five different countries for a total of 29 shows. Beginning in New Orleans on October 8th, 'An Evening With Greg Dulli' will feature Greg along with long-time Twilight Singers guitarist Dave Rosser and multi-instrumentalist Rick Nelson (Polyphonic Spree) performing a stripped down set. Dulli will lead his band through a wide selection of songs encompassing his entire career. 'An Evening With Greg Dulli' will be a limited run tour with only fourteen US shows along with stops in Ireland, Portugal, Spain and Belgium. Dates and on sale information provided below.

Greg Dulli began his musical career as the frontman and guitarist for the pioneering band The Afghan Whigs in 1987. The band was praised by critics and fans alike, releasing six studio albums before disbanding in the late 90's. Dulli went on to form The Twilight Singers, known for their indie, soul and electronic sound. The Twilight Singers have released four albums including the critically lauded Blackberry Belle & Powder Burns (One Little Indian) in 2003 & 2006 respectively. In 2008, Dulli collaborated with close friend Mark Lanegan to form The Gutter Twins. Their debut release, Saturnalia (Sub Pop), was chosen by SPIN as one of the top albums of 2008.

'AN EVENING WITH GREG DULLI' TOUR DATES
Tickets for all shows will go on sale later this week. Check www.thetwilightsingers.com for the most up to date information on where to purchase tickets.

* Venue Change - All tickets for the original venue will be honored. 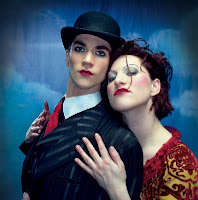 The Dresden Dolls Kick Off Fall US Tour
With Special 10th Anniversary Halloween Show in NYC!

Tickets On Sale Today (9/9) Starting at Noon EST at www.dresdendolls.com

After a long hiatus, The Dresden Dolls are thrilled to announce their first live tour in 3 years! The pioneering and influential "punk cabaret" duo comprised of Amanda Palmer (piano, vocals) and Brian Viglione (drums, guitar, bass) will be kicking off a few weeks of dates starting on Halloween at Irving Plaza in NYC. The date marks the exact 10th anniversary of the birth of the band (Viglione met Palmer on Halloween night of 2000, at an art/salon party at Palmer's house, at which she was playing her solo songs on piano. "Amanda's songwriting was so brilliant and raw, I couldn't have designed a more perfectly suited counterpart. I knew then I'd found my musical accomplice.", says Viglione. They will also make a stop in New Orleans for a special gulf oil spill relief-benefit for BTNEP, an organization that is working to preserve, protect, and restore the Barataria and Terrebonne estuaries of Louisiana.

Since The Dolls' last performance (which was at Rock The Vote in DC on the Inauguration Day of President Obama), Palmer has been tirelessly busy building her solo career and online empire, centered around the 2008 release of her Ben Folds-Produced solo album "Who Killed Amanda Palmer". The album was accompanied by a hardback-book of the same name and included a collection of dead photographs of Palmer and short stores by author Neil Gaiman (to whom Palmer recently became engaged). Palmer also recently released a donation-based Radiohead covers ukulele EP titled "Amanda Palmer Performs the Popular Hits of Radiohead on Her Magical Ukulele", setting the tech community abuzz about how a donation-based model can earn a mid-level artist a living wage. Before they embark on tour, Palmer will be starring as the Emcee in the American Repertory Theater’s production of Kander & Ebb's dark weimar musical "Cabaret". The production opened August 31, 2010 and runs through October 29. Many of the dates are already sold out. More information can be found HERE www.AmericanRepertoryTheater.org on A.R.T.’s website.

"The time apart has done nothing but given both of us an appreciation of how incredibly special and powerful our band is," says Palmer. "Our live musical chemistry is completely unique, almost magical, and we don't take that for granted. I can't wait to get on a stage with Brian again. Nobody hits the drums like that man - he's in a class all his own. And when we play together live, we create an entire world we can't otherwise create."


Meanwhile, drummer/producer and talented musical jack-of-all-trades Brian Viglione has appeared on 30 albums since 2008, most notably, Nine Inch Nails' "Ghosts I–IV". Viglione's latest hard-hitting album, "Face Of The Sun", which he produced and co-wrote, is available digitally via Bandcamp and will be featured on his new website,brianviglione.com. Amidst the busy recording and teaching schedule, he's toured internationally with The World/Inferno Friendship Society, Franz Nicolay, Black Tape For A Blue Girl, Martin Bisi, Botanica, and The Cliks. "A great strength of the band has always been that we've always given each other time to explore creative areas outside The Dresden Dolls, then bring what we've learned back to the table. Our love for the music and playing together is mirrored by the continual support of our fans, and we're more than ready to deliver the goods to them. "

The current wave of theatrical artists are citing The Dolls and their flamboyant emotional and theatrical antics as an inspiration, from up-and-coming theatrical-pop artist and Dolls’ fan Marina & The Diamonds to Lady Gaga (who lists The Dresden Dolls as an influence on her MySpace).

"It's been really inspiring to see an evolution towards theatrical freedom among indie bands over the last ten years", says Palmer. "When we were starting out in 2000, we were surrounded by the likes of The Vines and The Strokes. People often wrote us off as a gimmick because of our weird theatrical bent. Now we're surrounded by comrades...Antony, The Scissor Sisters, The Decembrists, Arcade Fire, CocoRosie, the list goes on and on. People aren't as afraid take risks onstage. It's inspiring, and I'm proud we've played our little part in the continuum of empowered freaky people."